Power, participation, and the dog internet 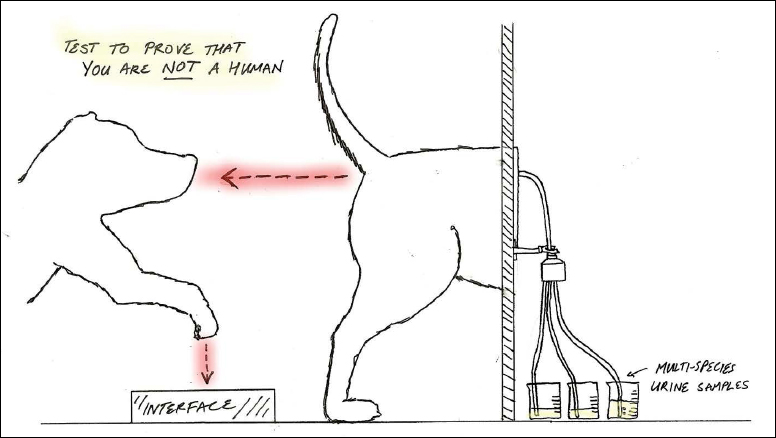 In this often cited paper, Lawson, Kirman and Linehan explore the importance of participatory design practices for developing Animal-Computer Interaction, and explore the importance of Speculative Design Methodologies to proposing plausible outcomes for new technologies which are designed by and for animals. The paper emphasises the importance of the shared power in design and the inadequacies of traditional participatory design methods to re-balance the power in the design relationship if we are undertaking inter-species projects. The paper does not explicitly draw on Buchanans work, but does pose that the technological structures that surround ACI are humancentric and are inscribed with an anthropocentric technological reasoning which restricts their ability to put the animal user at the important centre of the process.

The paper offers interesting reflections of methodology and the importance of thinking outside of the standard interface designs and technologies.

“In particular, we are concerned about the potential for negative impacts on animal welfare, since innovation appears to be driven largely by technology rather than the needs of the animals. It seems that in most cases the science upon which these gadgets rely to make their decisions and recommendations simply does not exist.” (p37-38)

“We argued that these gadgets have the potential to disrupt the relationship between human and animal. They can reinforce unrealistic ideas about animal behavior and foment distrust between owners and veterinary practitioners, creating a potentially harmful environment that can negatively affect animal welfare.” (p38)

“We might consider the animal users of these technologies as what Eric Baumer labels usees, because technology is imposed upon them, and ‘the system (does) things with the individual’s data to which s/he did not knowingly consent'” (p38)

“Given the importance of considering animal welfare, we suggest that design processes for ACI technology must at least regard animals as stakeholders, and potentially even include them within design activities. However, the process of co-designing technology with animal collaborators raises some strange and potentially intractable ontological issues.”(p38)

“[participatory design] requires a sharing of power between designers, users, and communities; none of the stakeholders should be excluded from the decision-making process, nor should any stakeholders be excluded from initiating ideas or raising new concerns. A clear and constructive dialogue must be established between all stakeholders.” (p38)

“humans have a strong tendency to project human characteristics, such as complex cognition and emotionality, onto animals that objectively do not have those abilities.” (38-39)

“Observing an animal may give us new ideas, but we can’t say that the designed outcomes are a manifestation of the animal’s own idea. Thus, the cross-species gap in language abilities, and tendency for humans to anthropomorphize animal behavior, significantly undermines our ability to build a constructive and empathic dialogue with animal users.” (p39)

“We argue, therefore, that due to diverging species-specific abilities, human-led co-design processes will necessarily be discriminatory toward animals, since, appropriating Wittgenstein, even if a cat could design, we could not understand it. It follows that genuinely animal-centric technology may be inscrutable and impossible to understand from a human perspective, since the interactions would be composed primarily of signals that are meaningful only to animals.” (p40)

“The human ability to use language to share complex ideas and opinions makes for ideal partners in a user-centered design process in a way that is problematic with animals. Those human strengths can actively undermine this process, since anthropomorphism can lead us to consider our users on unsuitable human terms.” (p41)

“As such, we argue that most technology currently being designed for use by pets is exploitative and entangled in human-centric values. To illustrate and explore the implications of this deeply unintuitive problem, we suggest using tools like speculative design to attempt to understand what an animal-centric technology might actually look like.” (p41)